The move was just across the street. But the difference is night and day for the City of Eloy, Arizona.

The facility’s stunning design by the SmithGroup has won praise from the city, its employees and community. “It makes you sit up a little straighter, walk a little taller,” said City Clerk Mary Myers, CMC. “We are very proud of it.” 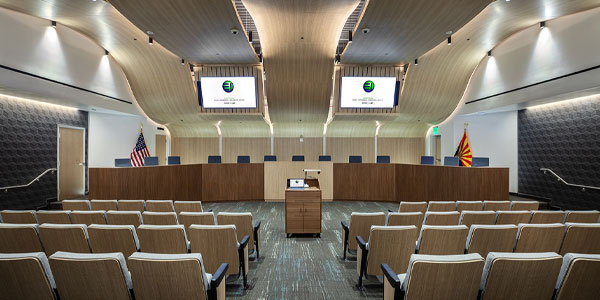 A focal point of the 18,000 sq. ft. building is its ultramodern 80+-seat City Council chambers with its sloped floor and wave-form ceiling. It sits in contrast to the lobby and other portions of the building, which pay homage to the city’s heritage and history. Beyond the architecture, the council chamber is set into motion by the latest audiovisual technologies integrated by ExhibitOne.

Gone are the days of the council and audience peering at the same pulldown screen to see projected images of presentations, maps, diagrams, etc. Now everything is shown using brilliant high-resolution monitors, including two large audience-facing monitors (plus one in the lobby) and a monitor for each participant seated at the dais. 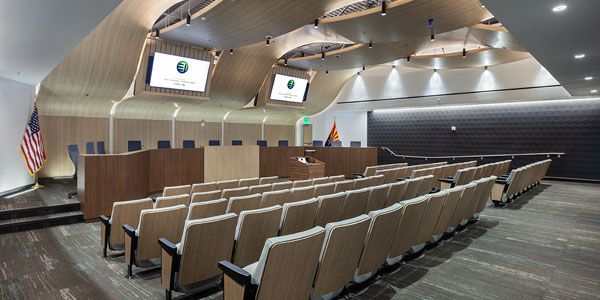 As impressive as the monitors are, Ms. Myers said the real technology hero has turned out to be the audio system.

“In our old facility, council members would continually talk over one another,” Ms. Myers said. “Even after doing this for 30 years, transcribing from the recorded audio was difficult. At times, I couldn’t tell who was talking, let alone what they said. I would just have to insert the word ‘inaudible’ and go on.”

The system has been set to allow only one live microphone at a time, plus that of the mayor’s. When one council member finishes speaking, Ms. Myers activates the microphone for the next council member who has signaled a desire to speak. “It has instilled a very orderly process that enables everyone to speak without interruption, Myers said. “I think everyone appreciates it.” 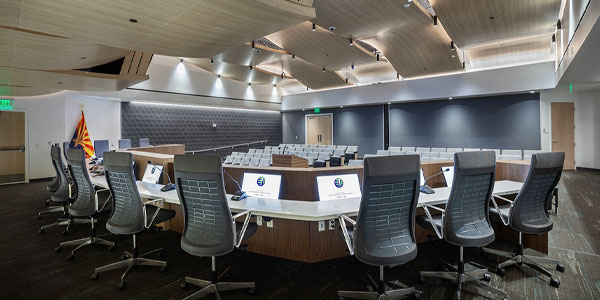 The council’s voting process also benefited from new technology. ExhibitOne integrated a solution whereby council members register their yea, nay or abstain with the push of a button. Their votes are automatically recorded in the official record and displayed on council chamber monitors.

With all of the new technology and new meeting protocols, one might expect a steep learning curve for everyone. 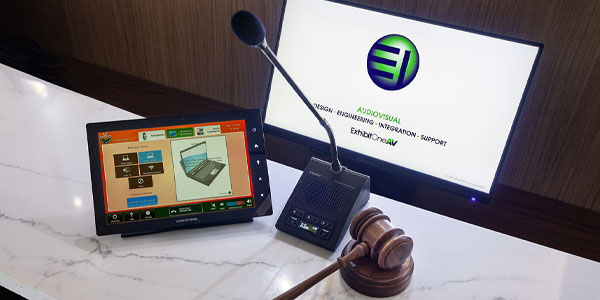 “Before our first meeting, ExhibitOne provided me with good one-on-one training,” Ms. Myers said. “I was comfortable with everything. Just to be sure though, they and one of the technology vendors came in for our first meeting. Before we got started, they oriented council members on using the microphones and our new voting process. The meeting in our new council chambers went very well.”

“Now, when we go back across the street to the old building for something,” Ms. Myers concluded, “we just look around and wonder, ‘How did we do it?’”