More than ever before, video walls are becoming the go-to visual display option for many companies. Globally, implementations have been increasing by nearly 50 percent for each of the past several years.

And for good reason. The stunning impact, flexibility and affordability of new-generation video walls are providing companies with highly cost-effective solution for increasing efficiency, productivity, enhancing communications, managing data and ensuring staff are informed and engaged.

Video walls don’t have to be the stereotypical massive array of monitors often seen backing up live stage performances. Just two monitors can be a game-changer over a run-of-the-mill, individual monitor. Afterall, 65”, 75” and even 85” 4K TVs are becoming commonplace in many people’s living rooms. Super-sized monitors don’t offer anything special anymore. In fact, after a certain point, they can be a detriment.

Multiple monitors enable tremendous flexibility – from simultaneously displaying a multitude of content sources for applications such as control centers, to stunning, impactful imagery for meeting rooms and lobbies as well as retail and entertainment venues.

Using multiple monitors also provides flexibility in the overall geometric footprint of the display area. While video walls are typically horizontal or vertical rectangles, they can also be creatively shaped presentations with screens arranged in different configurations. How different? For ideas, take a look through the video wall gallery of ExhibitOne visual networking vendor partner, Userful. 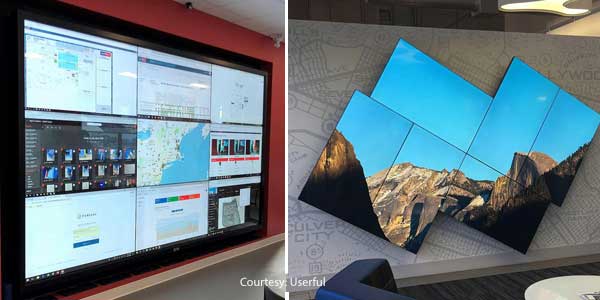 Just as important, multiple monitors don’t need to be all in the same place. The technology that drives video walls can just as easily drive individual monitors located throughout an office space, building or entire campus. Centrally controlled, information can at times be synchronized across all monitors or each monitor can display specific content, as would be the case with applications such as digital signage.

What is new about new-generation video walls?

Evolving technology has really done a number on the costs associated with video walls. For most modest-sized implementations, the biggest single cost has historically been the video controller and related hardware components. But now, a lot of the work traditionally done by expensive “back-end” hardware is being accomplished using software. For common implementations, this can drop the overall system costs by as much as 60 percent.

Additionally, over the past several years, video wall technology has been moving away from expensive dedicated cabling to running on a company’s standard network infrastructure, which has helped further reduce costs.

But, new-generation video walls also give you the option of going a step further. By utilizing Wi-Fi-enabled smart monitors, processing occurs in the cloud and the content is securely delivered to each monitor wirelessly. Cloud-based platforms can support video walls of unlimited size, any type of configuration and resolution…including 8K. Everything is managed through a web browser.

As you might expect, we get pretty excited about the capabilities and price performance of new-generation video walls. But it is all quite meaningless and worthless if it doesn’t help you achieve your communications objectives.

Which is the value of an AV systems integration company like ExhibitOne. We are the proverbial “match maker” when it comes to fully aligning objectives with the most appropriate AV technologies. Video walls are not always the right answer, but the lower cost and implementation options now available with new-generation solutions are making them an interesting option more than ever before.