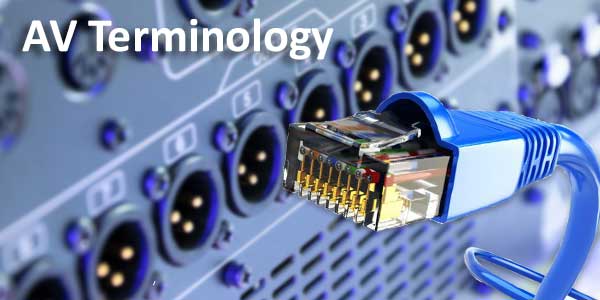 Assistive Listening System:  An electronic system for providing the audio signal from the sound reinforcement system to hearing impaired participants. The hearing impaired can hear the audio through a personal belt pack/earbud that is supplied upon request.

Audio Foldback:  A separate audio mix from the audio mixer is sent back to the musician so that they can hear themselves, loudspeakers or in-the-ear systems are typically used.

Button Panel:  A plate (size varies) typically wall or surface mounted with labeled pushbuttons.  The buttons are pre-programmed to control various functions of the system.  Some of the functions are power on/off, projection screen up/down, sound system volume, and source selection.

BYOD:  This is an acronym for “Bring Your Own Device”, and includes cell phones, tablets, iPad’s, etc.

Control System:  A control system is the device which receives and sends out commands from other devices, “controlling” them.

Display Port:  Display Port is an audiovisual connector typically used to connect a video source to a video display device. It is backward compatible with HDMI and DVI with the correct adaptor.

Distribution Amplifier:  A distribution amplifier takes a signal (audio or video) and electronically splits it into two (2) or more identical outputs.

Document Camera:  A pedestal mounted camera pointing down at a lighted surface, this device converts any object that will fit on the surface to a video format that can be viewed on different types of video displays.

Echo Cancellation:  Echo cancellation (EC) is an advanced electronic technology that is used to increase audio conferencing call quality by reducing the amount of audio created by local speakers that enters open microphone(s) in the same vicinity.

Electronic Annotation:  The electronic annotation processor gives one the ability to highlight (annotate) by checking, circling, etc. over portions of a displayed image. Annotated images can then be printed out and/or saved depending on the associated system.

Graphic User Interface:  The graphic user interface (GUI) is the layout on the screen of the touch panel that is used to send command to the control system which in turn send those commands to the devices you want to control. The layout typically will display various buttons, sliders, on/of lights, etc. with color coordination, such as green for on and red for off. These are custom typically custom-made for each client.

HDCP:  HDCP is an abbreviation for High-bandwidth Digital Content Protection. It is a form of digital copy protection developed by Intel Corporation to prevent copying of digital audio and video content as it travels across connections.

HDMI:  HDMI is an abbreviation for High-Definition Multimedia Interface. An HDMI cable has a unique connector that can only “connect” to HDMI ports and transmits digital video, audio, CEC (Consumer Electronics Control), and Ethernet data.

LAN: Local Area Network.  This is the building’s data network.

Laptop Input:  A set of audiovisual jacks for connecting the video and audio output of a laptop computer so that whatever is displayed on the laptop is simultaneously displayed and/or heard on the room’s audio and video systems.

Lumen:  The brightness of a video projectors light output is measured in lumens. The higher the number, the brighter the projector.

Program Sound:  Sound from a pre-recorded source, such as DVD, VCR, CD, computer or laptop.

RF:  This is an abbreviation for Radio Frequency. Many assistive listening systems are RF based, the radio frequencies allocated by the Federal Communications Commission (FCC) is 72-75MHz and 216MHz.

RS-232:  This is a protocol that is used by devices (computers, DVD’s, lighting panels, etc.) to communicate with each other.

Sound Masking:  The use of white noise played through loudspeakers in a particular area so that those in proximity to the loudspeakers will not be able to understand what others are saying that are nearby.

Speech Reinforcement:  The reinforcement of live vocals picked-up through microphones and amplified by loudspeakers.

Touch panel:  An interactive flat glass screen with a touch sensitive surface.  Using the touch panel, a user can turn the audiovisual system on and off, select sources for the various displays, and control individual devices, among other functions.

Video Graphics Array:  Video Graphics Array (VGA) is a video standard developed by IBM in 1987 for their line of personal computers. VGA connectors, although having been phased out some years ago for being analog and unable to use the new copy-protection protocols, it is still widely used.

VoIP:  VoIP is an acronym for Voice over Internet Protocol. Hardware and software enable voice phone calls to be made over an internet connection instead of a Plain Old Telephone System (POTS) system.

White Noise:   White noise is random noise that has an equal amount of energy at all frequencies. Commonly used in sound masking systems.