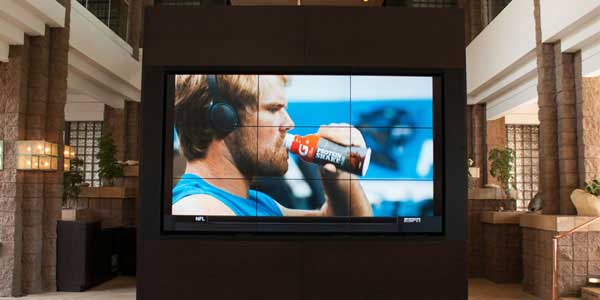 Convention centers, hotels, resorts, and casinos across the globe gain a competitive edge by providing their visitors with state-of-the-art capabilities and conveniences.

Do you want thousands of employees, vendors, or customers to be able to crisply see and hear your keynote speaker’s message? Are you broadcasting the new product demonstration via video teleconferencing to remote sites in other cities? Do you want to replace minutes with digital audio and video recording? ExhibitOne has the answers for presentation and telepresence.

Can your guests search through your resorts’ restaurants, view enticing images of each potential entrée, and then select room service with a touch of a finger using a flat screen control panel? If not, they can elsewhere. Are you keeping up to speed? ExhibitOne can customize your systems with their knowledgeable in-house programmers, ready to make your menus unique and easy to use.

Are your casino video walls optimized to display the best image for sporting events, keeping your players glued to their seats as they wager their luck? Can your operations track what digital satellite channels or video are being shown at any given moment, and adjust or change them with a single mouse click? ExhibitOne designs command centers that manage the entertainment effortlessly and intuitively with minimal personnel training.

Whatever the presentation application, ExhibitOne’s talented engineers and installation teams can make your brain storms and ideas into functioning technology that engages the senses.

Ft. McDowell, Arizona – The immaculate Ft. McDowell Casino recently hit the AV jackpot, courtesy of ExhibitOne Corporation in Phoenix, Arizona. This 10-year old casino with new hotel facilities now has a brand new, advanced audio system that is easy to control and contributes to the thrilling atmosphere of the casino floor and the luxurious ambiance of the hotel and resort grounds, providing guests with a pleasurable aural experience everywhere they go.

Completed towards the end of 2006, the casino’s new AV system is an impressive blend of sophisticated audio components and user-friendly control functionality that work to distribute the house music in a large number of different zones. With the new audio network in place, guests are treated to ambient acoustics throughout the casino and its new, adjoining hotel.

“Our sound system has never sounded better,” said Jim Flowers, IT Director, Fort McDowell Casino. “The guests are constantly complimenting us on the design and layout of the casino, and the sound system plays a large role in that. The system is very easy to use and has performed without a problem since the project was completed. Everyone at ExhibitOne did an outstanding job.”

On the casino floor, ExhibitOne developed an intelligent, adaptive audio system that automatically adjusts volume levels based on noise levels on the casino floor. Fifteen inconspicuous Shure MX202B/C microphones mounted from the ceiling receive audio from the floor and feed it into a Biamp AudiaFLEX processor. The AudiaFLEX then monitors the ambient sound in the room and automatically adjusts volume levels accordingly. After processing, audio is then distributed to Atlas speakers throughout the casino.

Control functionality is handled by an AMX NetLinx NI-4000 integrations system. ExhibitOne installed a touchpanel controller in each of the three rackrooms. Hotel employees can access the network via a password protected GUI designed by ExhibitOne. The network-friendly architecture of the AudiaFLEX and AMX NetLinx also made it possible for ExhibitOne to configure control for hotel employees from any PC on the LAN.

“The biggest requirement was that this turnkey system was user friendly,” said Kevin Sandler, CEO and President, ExhibitOne. “The seamless integration between the Biamp and AMX processors made that easy to accomplish. With the logic capabilities of the Biamp processor, we were also able to add an added level of sophistication in the adaptive ambient capabilities without having to add additional control functions. It’s a very streamlined system for this very sophisticated facility.”

This audio is also distributed to the outdoor areas of the casino to literally cover every zone of the casino and hotel. The Biamp AudiaFLEX feeds audio to Biamp MCA 8150 amplifiers and then routes that audio outside to TIC rock speakers that accentuate the aesthetics of the grounds and surrounding areas. “I think the most challenging aspect of the Fort McDowell project was managing the install in a facility that is open 24 hours.” recounts Ryan Teal, Design Engineer, ExhibitOne. “We had to navigate through slot machines and blackjack tables to install our speakers and adaptive ambient microphones. Cutting over to the new system was also a challenge, because the client wanted zero interruption in service – so we had to be sure the new system would work properly before we cut the power to the old one!”

“This was, by far, our largest Biamp deployment to date,” continued Sandler. “We’ve worked with Biamp for quite some time, but this is the most sophisticated project we’ve employed the processors for, especially for the adaptive ambiance that this system provides. The hands-free capability of the systems is something we feel can only be achieved using Audia.”